Welcome to my Blog. Your guide to health and happiness.

Enjoying Summer Toxin Free for You and Mother Nature 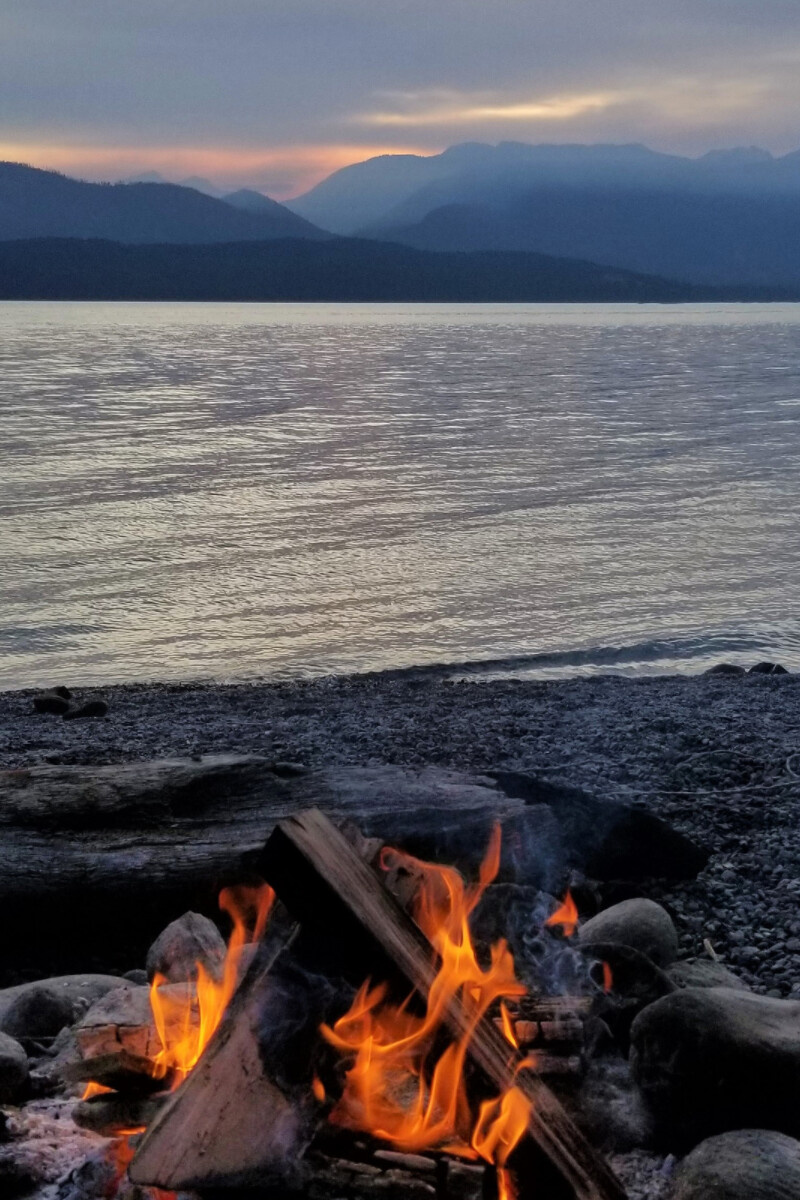 Summer brings lots of fun outdoor activities, traveling, spending time with friends and family.  Protecting ourselves from excess sun exposure and the annoying outdoor critters usually has us reaching for products that contain known toxins to the human body and Mother Nature.
Sunscreen, insect repellent and after sun products are just a few seasonal products that are used frequently. There has been a surge in the sales of new RV’s and travel trailers in the past year, which increases exposure to the off gassing of chemicals used in the production process.
As we spend more time outdoors in our campers, motor homes, and tents, we also expose mother nature to environmental pollutants such as household cleaners, shampoos, dish soap, insect repellent, sunscreen and so much more. It is up to each of us to make choices that support our health and the health of our planet while still enjoying the great outdoors.
A lot of people are completely unaware of the hidden toxins in the products they use and how they are impacting human and environmental health.  For some, exposure leads to obvious symptoms that happen quickly (rash, trouble breathing etc). For most of us, it is a silent, slow poisoning, the damage of which may not show up for years. Hormone disrupting chemicals relate to fertility issues for men and women, various cancers, heart disease, diabetes, thyroid conditions, and obesity. Mother Nature does not fare out much better with the effect of toxins showing up in plants, animals, and aquatic life. I highly recommend the documentary Stink for a more thorough overview of this issue. Here's a quick video I did to further explain the importance of removing toxins and some tricks I personally use!
Sign up for the members area and our team will send you a free Toxin Free Summer .pdf to give you tons more information! 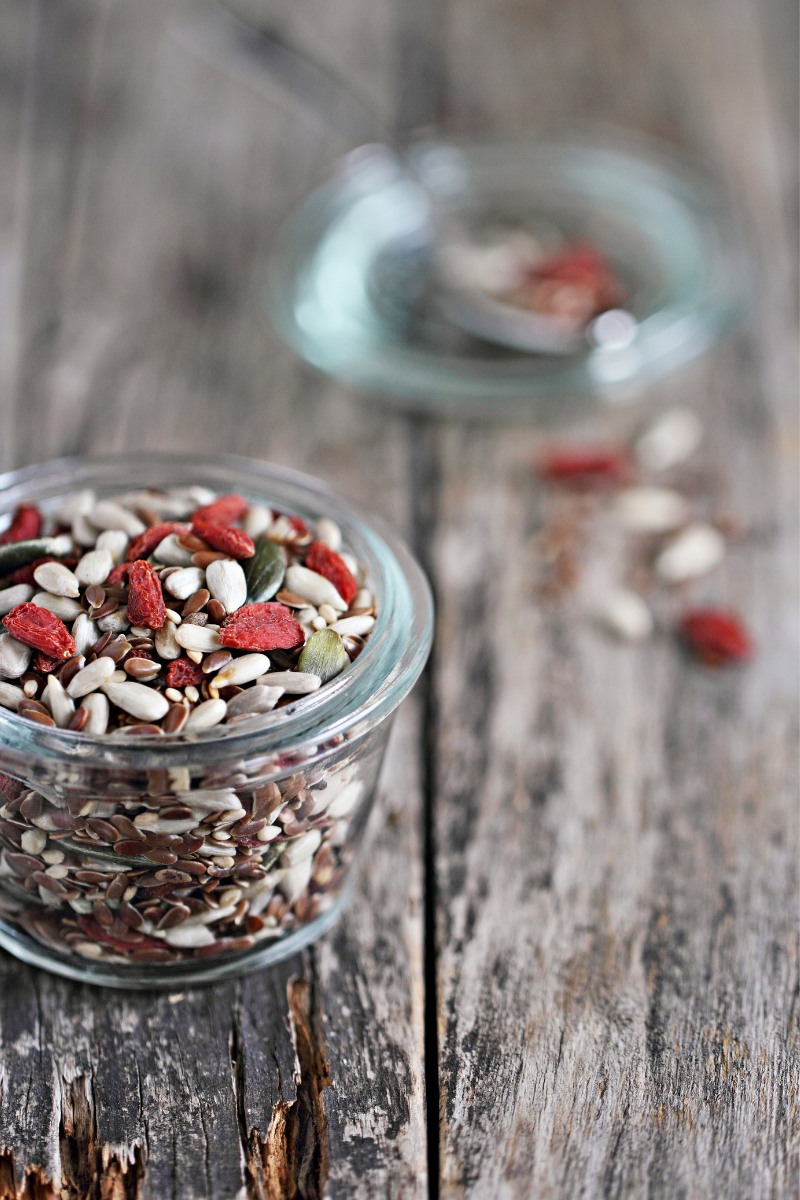 Here's a great recipe that I make for Bill & I all the time!    Mix Young Living's Dried Ningxia Wolfberries with almonds (or any nut of your choice) and organic raw Coconut chips:
Young Living Dried Ningxia Red Wolfberries: Can be used in any recipes that call for raisins, or dried cranberries (muffins, porridge, salads etc). I suggest making a trail mix of dried Ningxia Wolfberries with almonds, and organic unsweetened coconut chips. This provides a highly nutritious snack throughout the day.
Dried Ningxia wolfberries have an excellent nutrient and ORAC profile (see below)
Almonds are a very good source of vitamin E and manganese. Almonds are a good source of magnesium, copper, riboflavin (vitamin B2), and phosphorus. Fortunately, although one-quarter cup of almonds contains about 18 grams of fat, most of it (11 grams) is heart-healthy monounsaturated fat.
Coconut is high in fiber, B vitamins, plus iron and zinc. The saturated fatty acids in coconut oil are predominately medium-chain fatty acids (MCFA). MCFA help to lower the risk of both atherosclerosis and heart disease. MCFA do not have a negative effect on cholesterol. 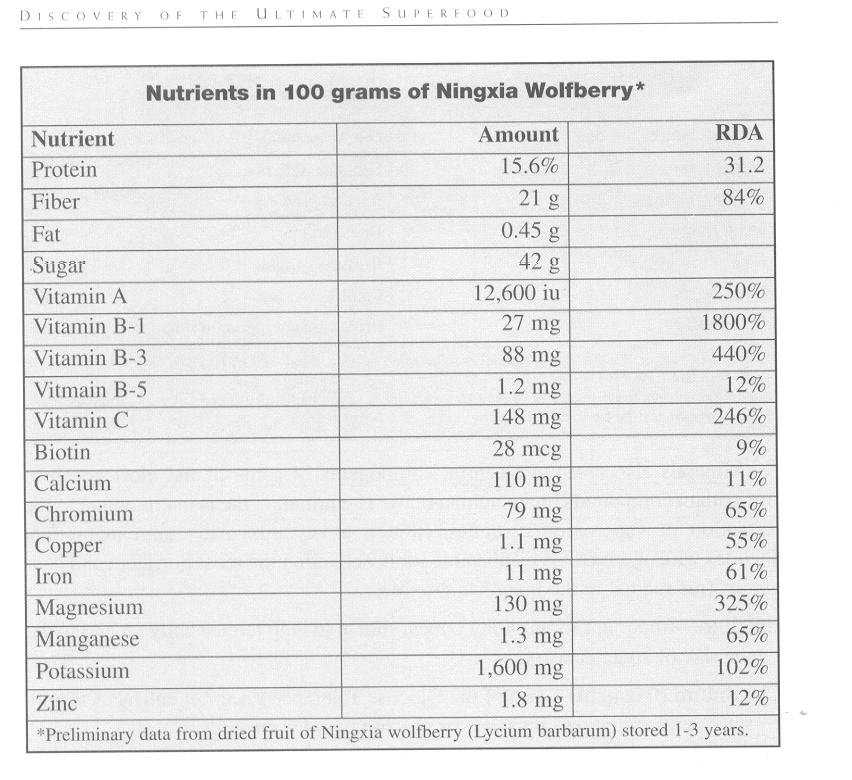 Did you know that a strong body of modern scientific evidence supports the wolfberry's legendary reputation?
Ancient references cited the wolfberry's ability to aid and protect the pancreas.* And modern Chinese scientists have determined that the wolfberry polysaccharide has “definite protective effects” on the pancreas cells that regulate the body's insulin system, the islets of Langerhans.*
Other researchers have determined that substances found in wolfberries have “prominent hepatoprotective activity,” meaning that they help protect the liver.*
Studies done in Beijing, China, show wolfberries to be effective in inhibiting inflammation and that they may induce an immune response.*
A landmark study published in the Journal of the American Nutraceutical Association concluded, “Wolfberry juice and its mixtures were shown to have immunomodulatory effects... by increasing splenic (spleen) microphages and splenic weight.”* There are a number of other studies that correlate increased spleen weight and improved immunological function.
Domestic and Foreign magazine published a story in the 1950s about the great herbal master Li Qingyun who lived more than 200 years and died in 1930. Li attributed his longevity to taking five grams of wolfberries every day. Li said, “From then on I became healthy and agile. I can walk a hundred li (a li equals half a kilometer) and not feel tired. I became better in strength and stamina than the average person.”
As studies continue, the science is clear—this remarkable fruit provides an abundance of health benefits!*
Not Just Any Wolfberry
The Ningxia variety of Lycium barbarum, as reported by the Xinhaua News Agency, “is far superior to ordinary Chinese wolfberry in both tonic effects and economic results.” Of the eighty different species of wolfberries worldwide, the Lycium barbarum variety of Ningxia is believed to have the highest levels of immune-stimulating polysaccharides.* Due to its superior quality, some medical studies done on the wolfberry have specified the use of the Ningxia wolfberry. And the Ningxia wolfberry won three gold prizes in the China Agricultural Fair and a gold prize in the Malaysia International Food Fair.
Ningxia's Perfect Geography for Wolfberries
The Huang He (Yellow) River originates in the Himalayan Mountains and flows through the Ningxia Province. This river creates a unique, mineral-rich, super fertile silt-water flood plain found nowhere else on earth. This unique geography produces incomparable wolfberries. Called “China's herbal medicine valley,” the area meets all of the stringent rules for China's prestigious “Green Certificate.”
A Perfect Infusion
NingXia Red® uses only natural, whole-fruit Ningxia wolfberry puree to retain more health benefits of the wolfberry. From the patented puree process in Ningxia, China, to the careful blending and bottling in glass, the nutritional value of Ningxia wolfberries is preserved in each and every bottle of NingXia Red.

It takes something truly extraordinary to last for 5,000 years. And, while Egyptians built the pyramids, and 2,200 years before Hippocrates became the father of Western medicine, Chinese physicians began recording their treasured medicinal legacy. Throughout these ancient writings, three health tonics consistently emerge: ginseng, ling tzi, and wolfberries. While ginseng was expensive and too potent for daily use and ling tzi was difficult to find, wolfberries were widely available and ideal for daily consumption.
NingXia Red® contains the amazing Ningxia or Chinese wolfberry, cherished for centuries, particularly in the Ningxia Province in China. Ancient medical texts mention the Chinese wolfberry's ability to regulate “vital energy,” “strengthen the physique,” and provide nourishment that can “lead to longevity.” The Chinese wolfberry was also said to “replenish vital essences” and “strengthen and restore major organs.”* 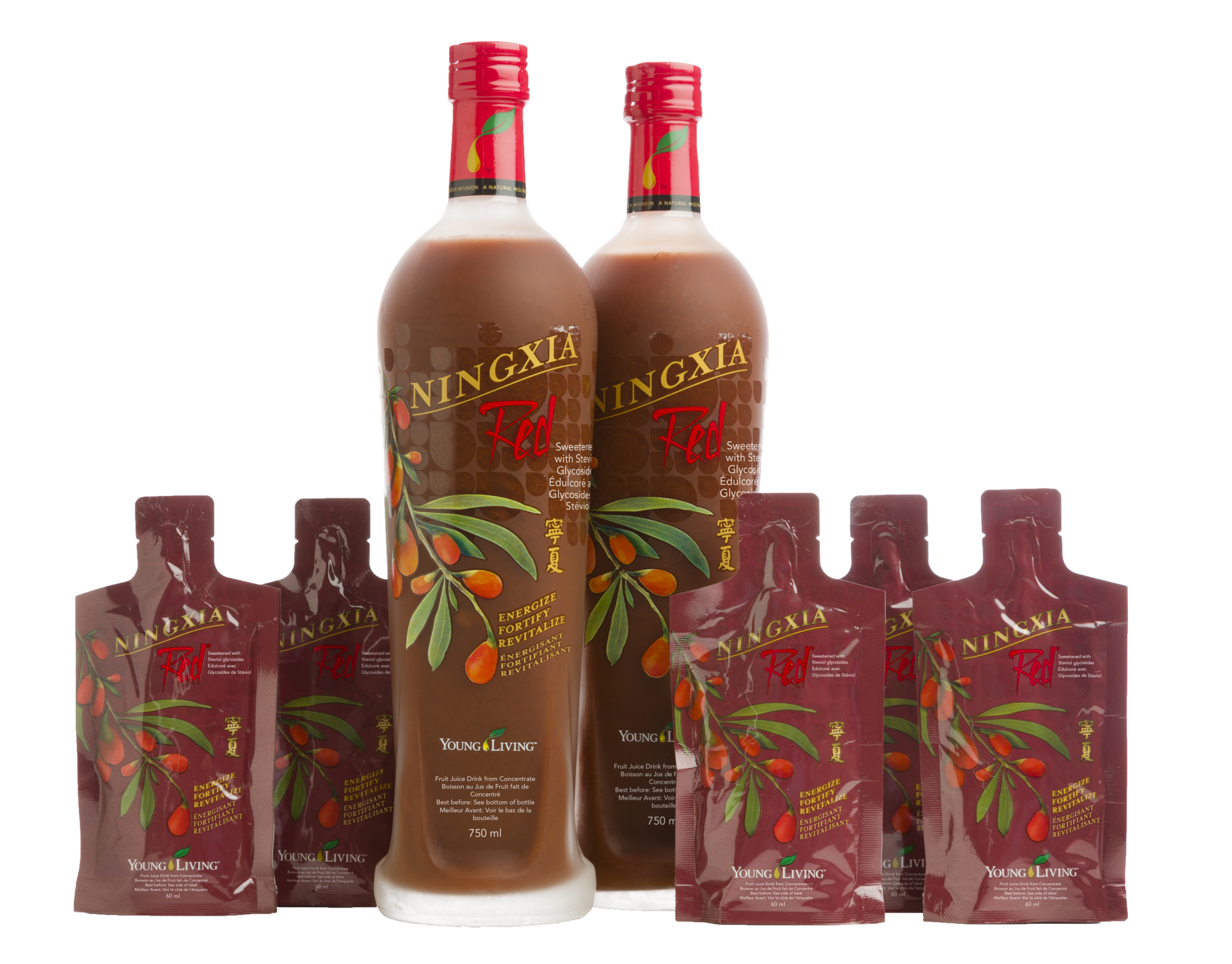 The most frequent references to wolfberries in early Chinese medical texts recommended wolfberries for strengthening the eyes, liver, and kidneys,* as well as for fortifying the “qi” (chi), or life force. The well-respected medical book, Shen Nung Ben Tsao, noted wolfberry benefits ranging from replenishing vital essences to strengthening and restoring major organs.* Li Shiz Hen, regarded by many as the greatest herbalist of all time, compiled the well-renowned physician's handbook Ben Cao Gang Mu. The book reports, “Taking in Chinese wolfberry regularly may regulate the flow of vital energy and strengthen the physique, which can lead to longevity.”
The book also shares this account:
“The Bao Shou herb store recorded a wolfberry elixir that promotes longevity.... A barefooted man named Zhang passed the formula of this elixir to an elderly person at Yi Shi County, who followed the recipe and lived for over a hundred years. The elderly man could walk extremely fast as if he was flying. His gray hair turned black again....”
The Homeland of Ningxia Wolfberries
Of the eighty different species of wolfberries worldwide, only one comes from China's Ningxia Province. Known as Ningxia wolfberries, this variety, Lycium barbarum, is the one used in NingXia Red. It has by far the highest levels of immune-stimulating polysaccharides.*
The Xinhaua News Agency reported that the Ningxia wolfberry “is far superior to ordinary Chinese wolfberry in both tonic effects and economic results.” And the Chinese national census once reported that the number of Ningxia residents living more than one hundred years exceeds the national average by 400 percent.
Locals call the Ningxia Province “China's herbal medicine valley,” and protect it by meeting all of the stringent rules necessary to be awarded the prestigious “Green Certificate.” They also hold an annual two-week festival to honor Ningxia wolfberries
Stay tuned for information on the Wolfberry of today on Friday!

Wolfberries are the bright red, one-third to three-quarter inch fruit of the wolfberry plant. Of the eighty different species of wolfberries worldwide, the Lycium barbarum from Ningxia, China, is the variety used in NingXia Red. Called “goji” in their native China, wolfberries have a long tradition of use in folk medicine.
Wolfberry—A National Treasure in China
The good health and vitality of the elderly in Ningxia, China, has long been attributed to wolfberries. A bowl of fresh wolfberries a day is part of daily life in Ningxia. And a yearly two-week festival in Ningxia celebrates the wolfberry and the amazing health benefits of the fruit, which is considered a national treasure.
We will talk about the Ancient Traditions in the next post!
Read Older Updates 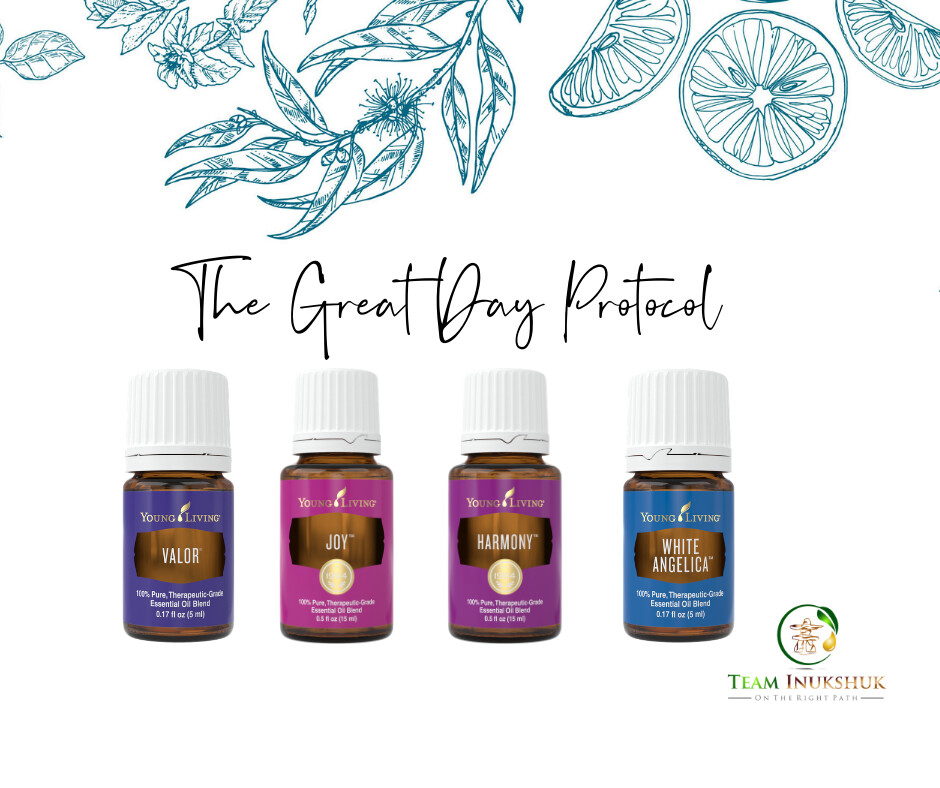 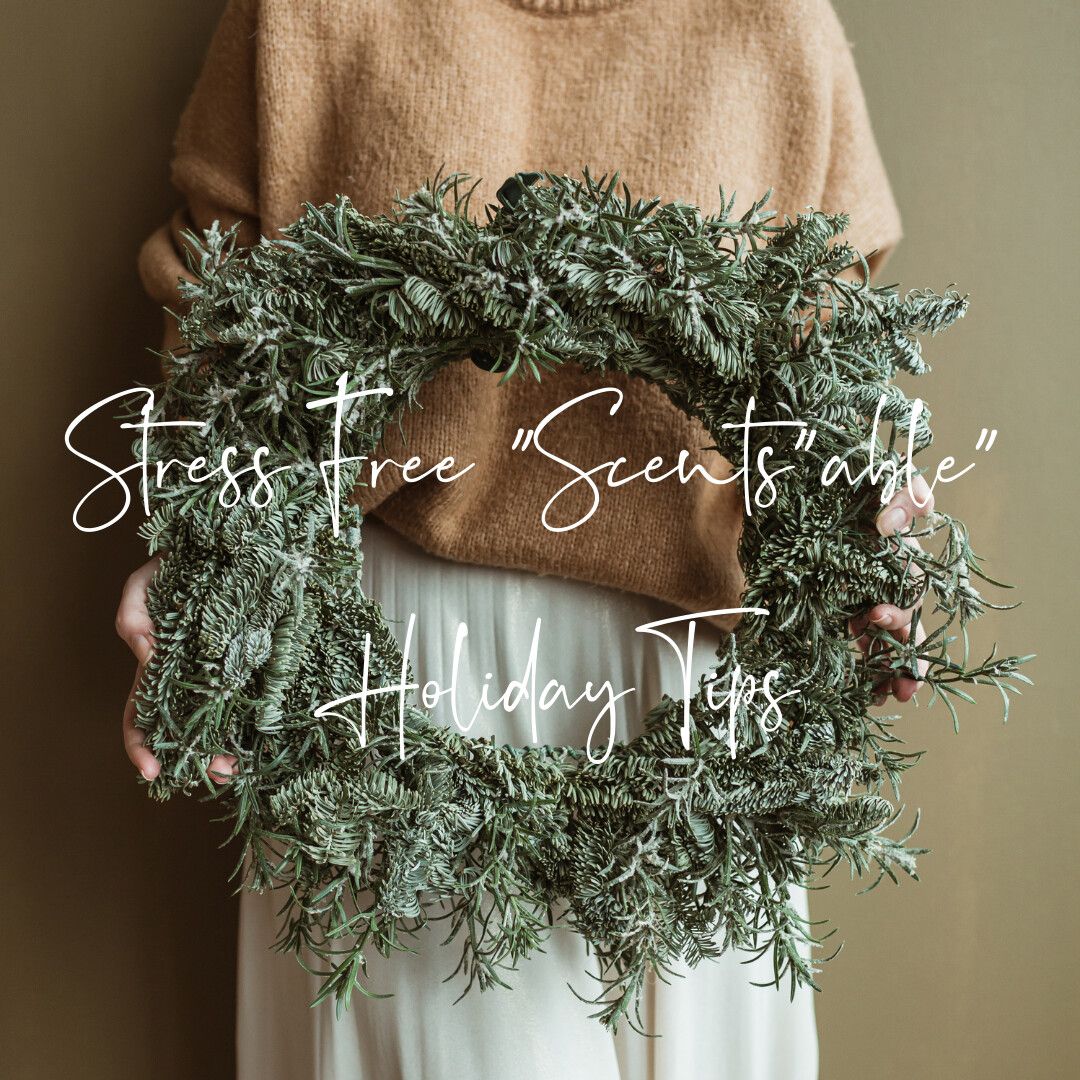 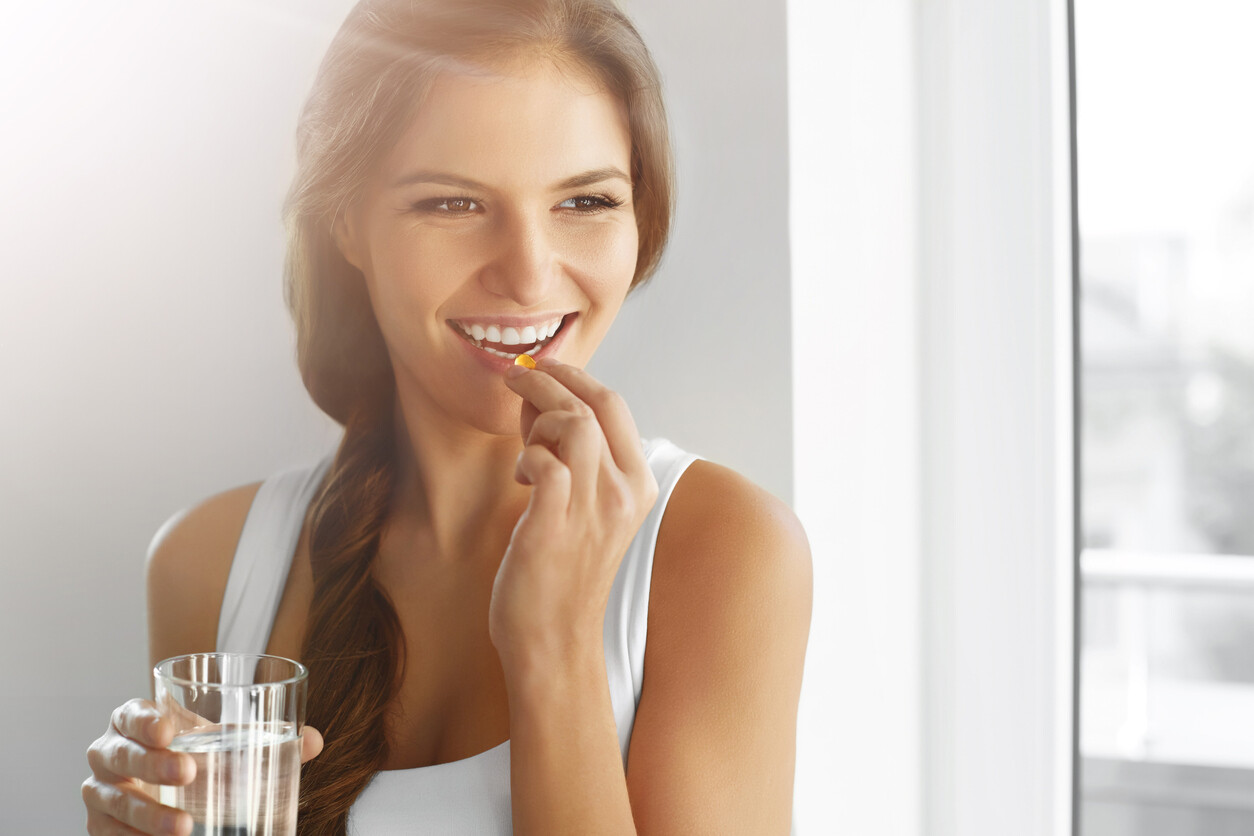 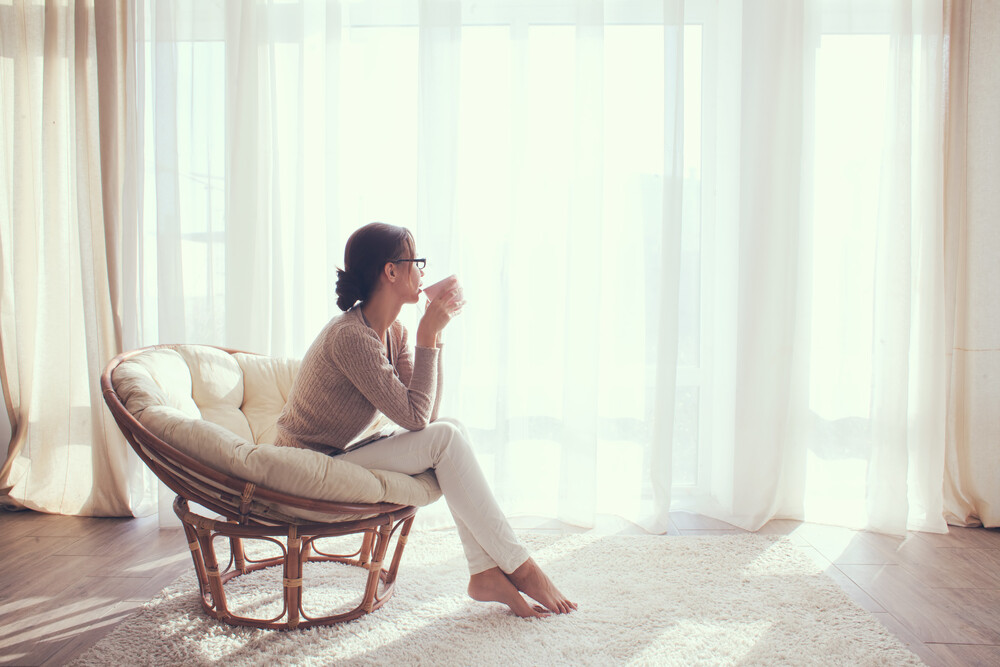 My journey began in the health industry 39 years ago. It was my passion to help others that led me to meet a mentor who introduced me to Young Living Essential Oils. It didn't take long before I realized the benefits of the oils and embraced them more in my practice and at home with my family.
Now today, I am dedicating my journey to inspire and mentor others. I work behind the scenes with you, generously sharing my time, expertise, and insights to nurture your potential, keeping you on track, and helping you grow -- personally and professionally.
My mission is to help people make effective, powerful changes to their health, physically, emotionally, and financially.
Contact me and say hi, I'd love to learn more about you. OR keep scrolling to watch my quick video on the 5 key areas to a better YOU!